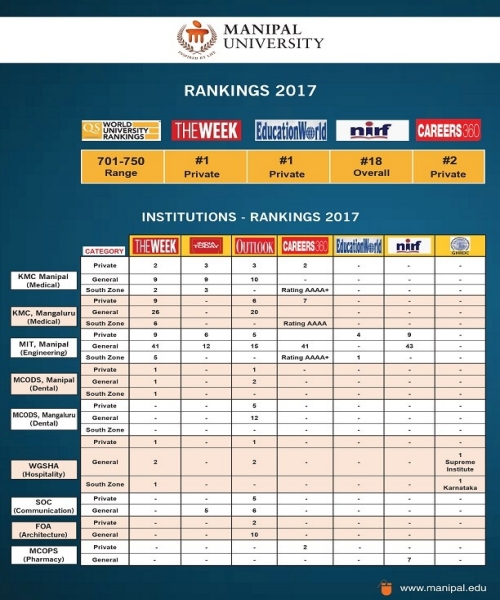 Manipal Academy of Higher Education along with its institutions have done pretty well in the ranking of 2018. Almost all the institutions have seen their rankings go up and Faculty of Architecture has made its presence felt in the National Institutional Ranking Framework (NIRF) ranking for the first time.

MAHE continues to be the best private university in the country being ranked #1 by three prominent ranking agencies, The Week, India Today and Education World. The Week has ranked MAHE number one for the fourth time in a row and Education World, third consecutive year. There was a considerable improvement in the NIRF ranking as well -- moving seven places up to the 11th position from the 2017 ranking. Kasturba Medical College, Manipal and Mangalore too have done well in the rankings, particularly the NIRF. Manipal College of Pharmaceutical Sciences has maintained its seventh position in NIRF.

MCODS and WGSHA continue to be top institutions in 2017 Rankings, KMC and MCOPS figure in QS World Rankings

Manipal Academy of Higher Education and its constituent institutions have done a lot better in the parameters employed by different agencies to rank universities and colleges in the country this year. While there are reasons to feel happy about the rankings as far as the institutions are concerned, the recognition that the University received by breaking into the QS World University Rankings 2018 at the 701-750 band came as a pleasant surprise and is a shot in the arm. The Welcomgroup Graduate School of Hotel Administration (WGSHA) and Manipal College of Dental Sciences (MCODS), Manipal, have been ranked as the number one colleges in the country for quite some time. They are at the top because all parameters that count towards the rankings are being taken good care of year after year.

The QS World University Rankings are compiled using six simple metrics that effectively captures university performance. “So, for a start in the world rankings, the 701-750 band is very good,” said Vice Chancellor, Dr H. Vinod Bhat. “We’ll improve and do a sub-600 the next time round,” he added.Two other institutions, Manipal College of Pharmaceutical Sciences (MCOPS) and Kasturba Medical College (KMC), Manipal have also made the QS World Rankings by subjects this year. That’s another milestone for the University. MCOPS found a place in the world rankings in the 250-300 range and KMC in the 451-500 range. 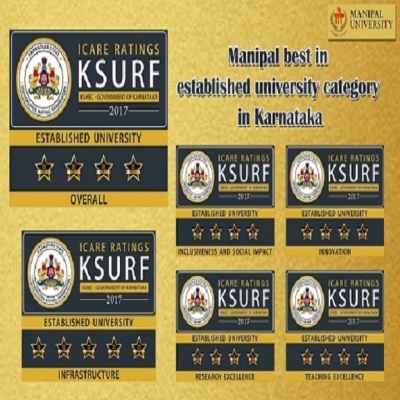